The Governing law and the dispute resolution clause in the underlying MoU read as under:-

17.1 This MoU is governed by the laws of India, without regard to its conflicts of laws provisions and courts at New Delhi shall have the jurisdiction.

17.2 Any dispute, controversy, difference or claim arising out of or relating to this MoU, including the existence, validity, interpretation, performance, breach or termination thereof or any dispute regarding non-contractual obligations arising out of or relating to it shall be referred to and finally resolved by arbitration administered in Hong Kong.

The place of arbitration shall be Hong Kong.

The number of arbitrators shall be one. The arbitration proceedings shall be conducted in English language.

17.3 It is agreed that a party may seek provisional, injunctive, or equitable remedies, including but not limited to preliminary injunctive relief, from a court having jurisdiction, before, during or after the pendency of any arbitration proceeding.

Clause 17.1 of the MoU stipulates that the MoU is governed by the laws of India and the courts at New Delhi shall have jurisdiction. The interpretation to Clause 17.1 shows that the substantive law governing the substantive contract are the laws of India. The words in Clause 17.1 “without regard to its conflicts of laws provisions and courts at New Delhi shall have the jurisdiction” has to be read along with Clause 17.3 of the agreement. As per Clause 17.3, the parties have agreed that the party may seek provisional, injunctive or equitable remedies from a court having jurisdiction before, during or after the pendency of any arbitral proceedings.

In nutshell, if one has to demarcate ‘place’, ‘venue’ and ‘seat’ then following diagram may help to understand the difference. 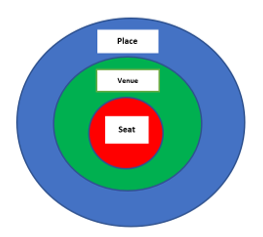 (1) The parties are free to agree on the place of arbitration.

(2) Failing any agreement referred to in sub–section (1), the place of arbitration shall be determined by the arbitral tribunal having regard to the circumstances of the case, including the convenience of the parties.

(3) Notwithstanding sub–section (1) or sub–section (2), the arbitral tribunal may, unless otherwise agreed by the parties, meet at any place it considers appropriate for consultation among its members, for hearing winners, experts or the parties, or for inspection of documents, goods or other property.

The expression ‘place’ in subclause 1 & 2 above means juridical seat of arbitration whereas the same expression in subclause 3 denotes venue. Thus, what is reasonable to infer that ‘place’ is a wider set which encompasses ‘venue’ and ‘seat’ depending on the context in which it is used subject of course of contrary indicia, if any, agreed by the parties in their underlying contract.

In essence, the genesis of what has been observed in this case by the Supreme Court of India maybe traced from English Authorities. In Braes of Doune Wind Farm (Scotland) Limited v. Alfred Mcalpine Business Services Limited [2008] EWHC 426 (TCC), the clause in scrutiny read as under:-

The English High Court interpreted the above clause to mean that the parties’ express agreement that the “seat” of arbitration was to be Glasgow, Scotland must relate to the place in which the parties agreed that the hearings should take place. However, by all the other references the parties were agreeing that the curial law or law which governed the arbitral proceedings was that of England and Wales. Although authorities establish that, prima facie and in the absence of agreement otherwise, the selection of a place or seat for an arbitration will determine what the curial law or “lex fori” or “lex arbitri” will be, where in substance the parties agree that the laws of one country will govern and control a given arbitration, the place where the arbitration is to be heard will not dictate what the governing or controlling law will be.

It is common for laws, rules and commentaries to use “place” and “seat” of arbitration interchangeably. However, “seat” seems preferable to “place” as it reflects more accurately the juridical nature of the concept, the nexus between territorial attachment and applicable law. It is “a legal construct, not a geographical location. The arbitral seat is the nation where an international arbitration has its legal domicile or juridical home”. Reference to the “seat” also helps to differentiate juridical attachment from the physical place where hearings and meetings are held (i.e. the venue), thus avoiding ambiguity and the potential for arguments about the intended location of the seat where arbitration agreements are poorly drafted in this respect (as regularly seen in practice). The Model Law and most arbitration rules draw a clear distinction between the seat of arbitration and the venue for hearings and meetings, and provide that the latter may change according to convenience without affecting the underlying connection to the seat.[2]

Disclaimer: The views expressed in this post are mine and do not reflect the views of the organisation(s) I am engaged with